Sharpening is making a dull knife sharp. Honing is maintaining a sharp knife. Most razor people call what they do honing - experts are called honemasters or honemeisters.

Stropping is when you use an even finer material such as leather to remove the burr and any extra material, straighten the edge and make the blade even sharper.

Some people bundle it into "sharpening" or put it into "restoring" but blades often need to have their "bevel" set. The bevel is the face of the actual cutting part of the blade. There can either be one or two bevels depending on whether the blade is sharpened on both side. Even "single bevel" blades such as the single bevel Japanese sushi knife and razor have a tiny bevel on the back side, but are just sharpening at an asymmetrical ratio such as 10:1.

The basic idea is to use a fairly rough stone such as a 400 grit stone to fix any major damage. Then use something around 1000 grit to set the bevel. Then you go to increasingly finer stones such as 3000 grit, 8000 grit, etc. to progressively sharpen and polish that edge rubbing out the scratches from the previous stone with smaller scratches from the new stone.

On the last, "finishing stone," often a natural stone such as a Japanese natural whetstone or a Belgian Coticule, you polish and finish the blade. On the natural stones, because the "slurry" (the soft material that comes off of the stone as you hone) breaks down into finer material and because the stone itself is made up of non-uniform particle sizes, using less pressure on the blade can sharpen at a progressively softer rate - apparently more than synthetic stones.

After you have the mirror finish from the finishing stone, you really clean it up and make the edge razor sharp and smooth by giving a few laps on the strop.

That is my understanding of the general flow as of this writing, but I keep learning more and more... Yesterday, for example, I learned that many German sharpeners use convex stone surfaces to give the honemeister more control of where the stone touches the blade and allow more fine control whereas the Japanese seem to always want a perfectly flat stone for razors. 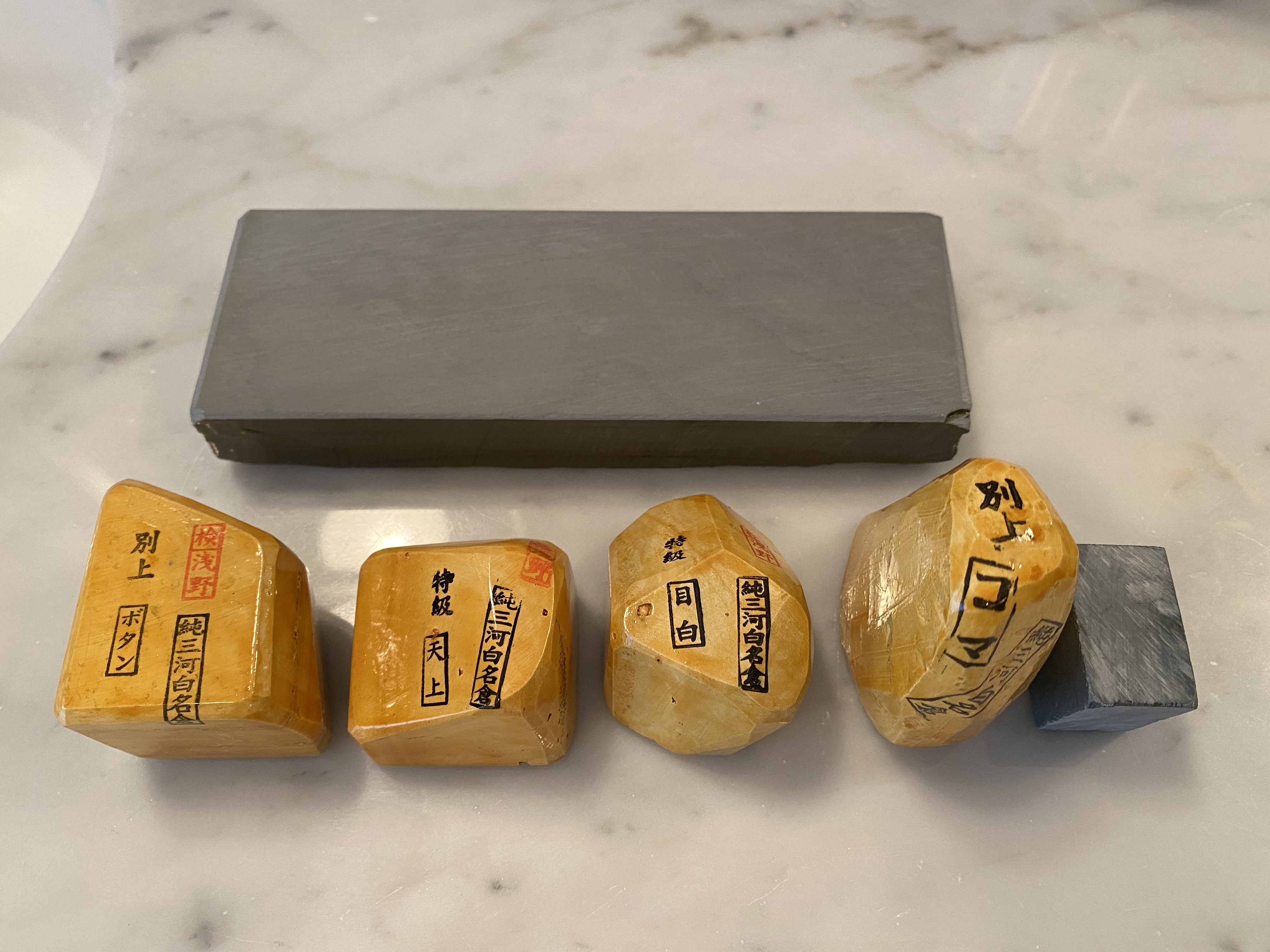 Today, I got my first Japanese natural stone and some Mikawa nagura. The awasedo that I got was a Shobundani and I got a Botan, Tanjyou, Mejiro and Koma nagura along with a tomo nagura. I got them as a set on Etsy from this guy.

I also got my Iwasaki Japanese kamisori razor. I tried to shave out of the box. In addition to my crappy lathering, I didn't really have the hang of shaving and I ended up with lots of little bloody spots. I stopped part way through and decided to try to hone the blade.

I looked at it under my loupe and got a good sense of the marks on the edge.

It looked like the bevel was already set but that it needed an edge honing so I put it on my Yoshihiro 3000 and then moved to the Shobundani awasedo using progressively the Botan, Tanjyou, Mejiro, Koma and then eventually to tomo. I shaved (dry) after each stone and looked at the edge under the loupe to get a sense of how each stone sharpened the blade. It was quite amazing that I could see and feel (or thought I could feel) a slightly better edge after each stone. By the end, I could DEFINITELY feel a difference.

I tried a (still fairly crappy) new lather and tried it out "for real". I was a bit too tired to do a whole shave, but in the few sections that I gave a real try at, the shave went very well. So excited. I can go to bed now.