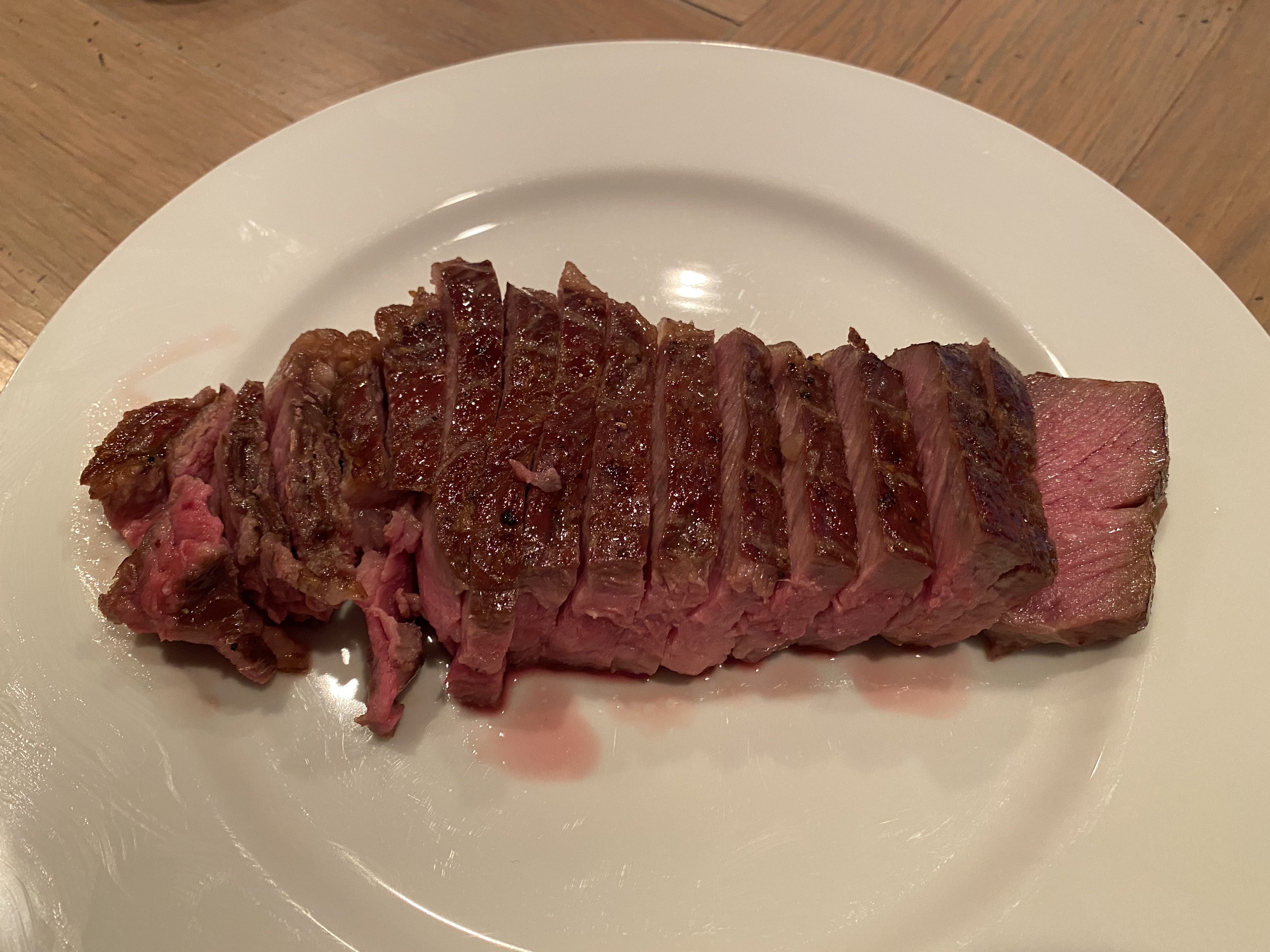 I started reading Nathan Myhvold's Modernist Cuisine at Home. It's a beautiful and great book - especially the chemistry and the very "tech" style practical elements such as using emulsifiers for sauces and other more "modern" ingredients and cooking techniques. I got to the chapter on steaks just when my 1.5 inch dry-aged t-bone steaks from Savenor's were dry-brining in my fridge. Nathan had a number of recommendations including sous vide, slow low-heat oven and BBQ grill with ice pan. I definitely want to try to grill with the pan and I would have gone with sous vide, but my sous vide was being used by the chicken confit... so I decided to go low-heat in the oven. Nathan's recipe was super low 170ºF or so for 50 min for a 1 inch steak. He said a 2 inch steak could take 3 hours! His recipe called for searing the steak first after a short time in the freezer.

After looking around on the Internet and reading Kenji Lopez's post on reverse sear, I decided to go low-heat in the oven with a reverse sear rather than a pre-sear.

Nathan had the oven at "160ºF or its lowest temperature setting" whereas Kenji sets the temperature at "between 200 and 275ºF" because "many ovens can't hold temperatures below 200ºF very accurately." Nathan is clearly more of a hardware snob. My Wolf oven allowed me to set it at 170ºF but the temperature varied widely between 180 and 213ºF at the middle rack on convection bake.

I put my 1.5 day, dry-brined, dry-aged beef on a rack with bone side facing the back of the oven and set the temperature to 170ºF. I stuck the steak in at 3:15PM to give me plenty of time. I stuck a thermometer into the edge of the steak and pushed it to intersect with the bone on the inside in the middle of the steak - the part that I thought would be the coldest when completed.

At 5:24PM, the steak was at 128ºF, the oven was 180ºF so I pulled the steak. I jammed my instant thermometer in several places and noticed that it was colder in the middle of the meat than by the bone. Unbelievable! Probably a combination of the bone facing the back of the oven and it sitting there for so long was the cause. In the middle of the meat, I recorded a 119ºF reading.

I set the oven to 220ºF and put the steak back in. At 5:35PM I pulled the steak again, this time with recording 122ºF at the coldest spot with my instant thermometer. Interestingly, the smell (probably because there is no sear) of the steak and the oven weren't really that great - sort of funky actually. I seared it on a cast iron skillet with oil for around 1 min per side, tossing in some butter at the very end. The steak was so dry it barely sizzled, but it seared perfectly - crisp, brown, wonderful smell. I sliced the steak and served it with soy sauce and wasabi. It was a tad over-done. However, was very good and tasted almost like wagyu. It may have been one of the best steaks I've made. I think the very slow cook caused an incredibly complex chemical reaction with the perfect sear at the end. Yum!

Back of the oven, I had heard, is hotter than the middle. With the convection oven, it might even be amplified if just in front of the vent. Will measure next time.

The reverse sear works especially well because the surface of the meat was super-dry compared to pre-sear.

Reverse sear is more difficult to time than pre-sear because there is more of a range of temperature change after pulling the steak because of the sear. The appropriate temperature to pull the steak is made even more difficult if the temperature of the oven has been changed because the speed of transmission of internal temperature from the outside to the inside is less "known." However, putting the sear at the end times the sear perfectly before serving vs the pre-sear which probably tastes and smells better.