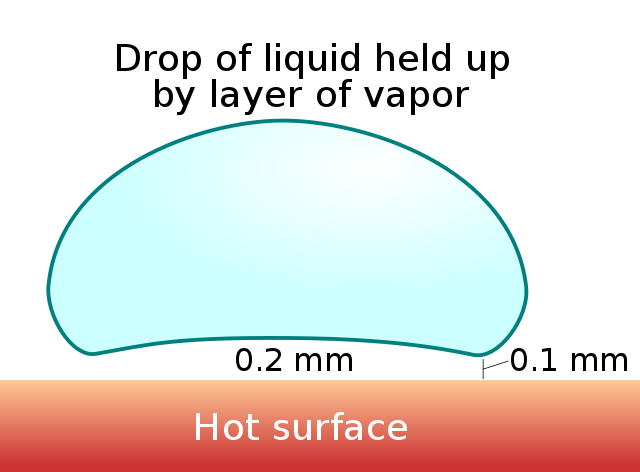 The Leidenfrost effect, according to Wikipedia:

The Leidenfrost effect is a physical phenomenon in which a liquid, close to a surface that is significantly hotter than the liquid's boiling point, produces an insulating vapor layer that keeps the liquid from boiling rapidly. Because of this 'repulsive force', a droplet hovers over the surface rather than making physical contact with the hot surface.

This is most commonly seen when cooking, when a few drops of water are sprinkled in a hot pan. If the pan's temperature is at or above the Leidenfrost point, which is approximately 193 °C (379 °F) for water, the water skitters across the pan and takes longer to evaporate than it would take if the water droplets had been sprinkled into a cooler pan.

There are a number of articles on the web that describe the Leidenfrost effect as the key to cooking eggs and other things in a stainless steel pan without sticking. Specifically, instructions typically suggest heating the pan slowly or heating the pan and then allowing it to sit for awhile before heating it again. This step is likely to be in order to maximize the amount of heat that is carried across the whole pan instead of just on the surfaces in contact with the flames. I imagine that this allows the pan to stay hotter after the cold ingredients hit the pan and evaporation cools the pan.

Then, you can check if the pan is at the Leidenfrost point by dropping water on it. If it skips across the surface, then we're in the zone. If it's too cold or too hot, it should just evaporate.

Another key thing, according to some people, is for the oil to be cooler than the pan. Therefore, add the oil to the pan just before adding the eggs or other ingredient.

I've tested this with eggs and it works well, allowing an egg to fry without sticking.