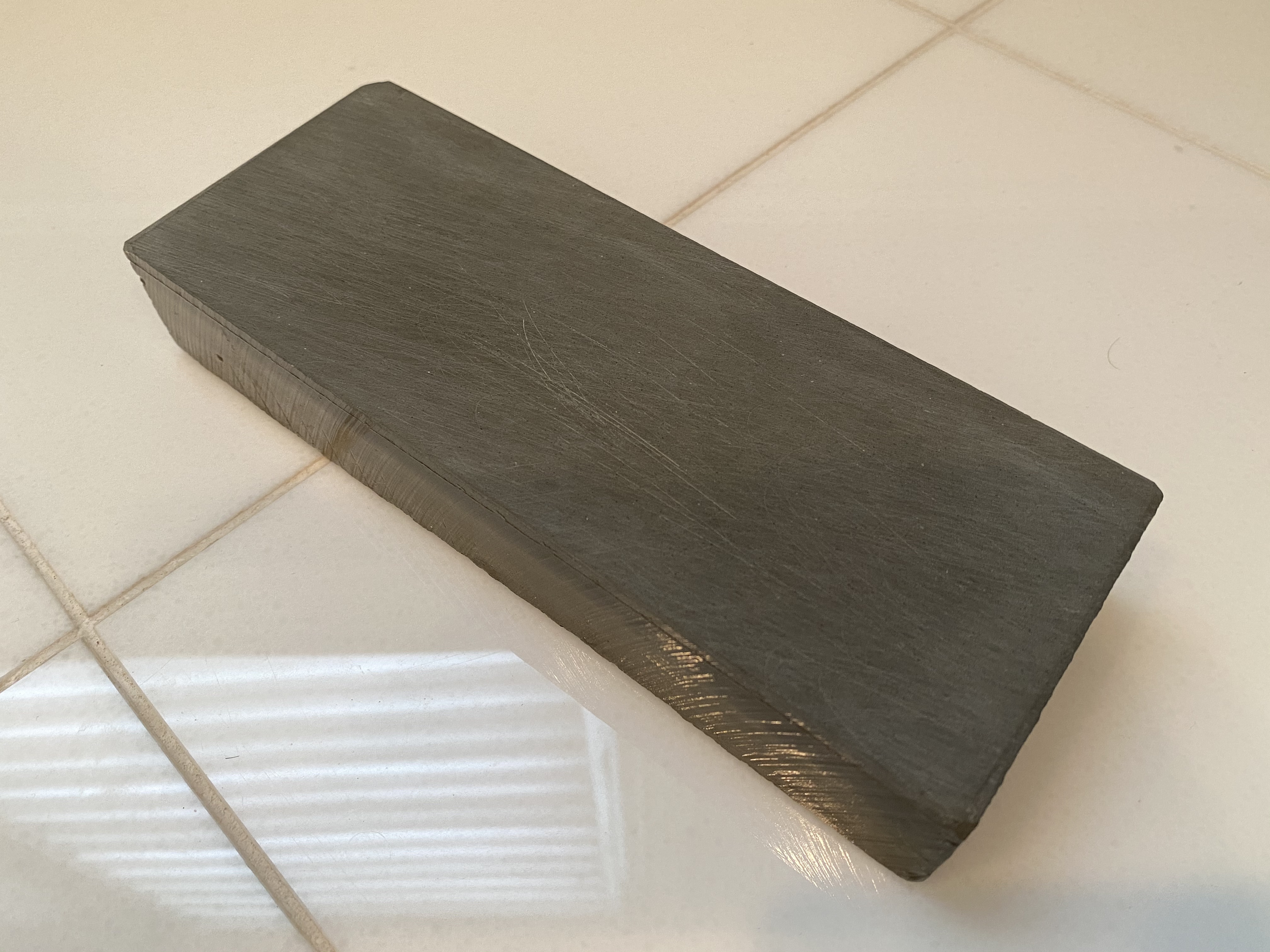 Ohira Asagi
Vintage from the 1970s

What’s in a name?

Ohira - refers to the mine or region in which the stone was derived.

Asagi - refers to the color.

Awasedo - refers to a finishing stone

This stone is lapped flat. I lapped it with an atoma diamond plate, and chamfered the edges. It’s sealed with several thin layers of cashew lacquer on the sides. I used to think sealing the bottom was necessary but I do that only on some stones that need extra support. Additionally this stone has a beautiful Kawa (bottom) and I thought sealing it would ruin it aesthetically. If you purchase this stone and wish me to seal the Kawa I will do so free of charge. Just give me a couple extra days to let the stone cure.
My thoughts on this stone are that it is a true Awasedo. Some stones are listed as Awasedo but underperform. Additionally this stone is an Ohira stone and that mine is known for producing nice suita and hard Asagi stones. Ohira is one of the more famous mines, and is still somewhat active today.
Testing the stone confirmed it as an excellent as a final stone, and top performing finisher. It is relatively hard. The stone is also noticeably very wide. It leaves almost an extra 3/4 of an inch past the typical straight razor leaving you plenty of room to hone cleanly on this stone.

Again, it is a hard stone. I thought I could list it as 5 out of 5 but wanted to be a bit more conservative as it held up against the atoma plate and produced fine particles, making slurry harder to raise than a stone at level 4. It also is not a thirsty stone and takes some time to dry out with water on it. This is usually a sign of a hard stone. In other words, the longer it takes the water to dry on the surface of the stone the harder the stone normally is. This test is but one test to determine hardness so I don’t assign hardness based on it alone. However, this stone compares well with one of my very hard Ozuku stones that is rated at 5++. The sound of the stone is relatively the same too as the super hard Ozuku. Again, sound is no guarantee of hardness. It is just something I consider among other characteristics.
I really think this is a great finishing stone for a straight razor. This stone was also selected and graded by Imanishi Wholesalers, members of the Kyoto Toishi Miners Union. I have purchased four stones labeled by this wholesaler and every one of these stones excelled and was one of the best stones I'd ever worked. I will include the Imanishi decal along with the stone. As I mentioned above, the stone is a little extra wide too making it ideal for large straight razors. It’s got everything you could want in a Jnat.
Feedback is soft, milky like that of many suita, but a bit of a glassy undertone, reminiscent of the harder finishing stones. There is no grainy or gritty feel here. Kamisori razors make a kind of clapping sound when applied to the stone. Razors glide across it with no interference whatsoever. I would consider using very little Nagura on it. I tended to think the stone performed best without Nagura and just a little water for the final touch up and finish. Still, this stone is versatile and experimenting with it I think you’d reveal it cuts well with Mikawa Shiro Nagura stones. There are no chips and no lines, making it a very clean stone. A stone for the Jnat collector or true connoisseur. First class stone.