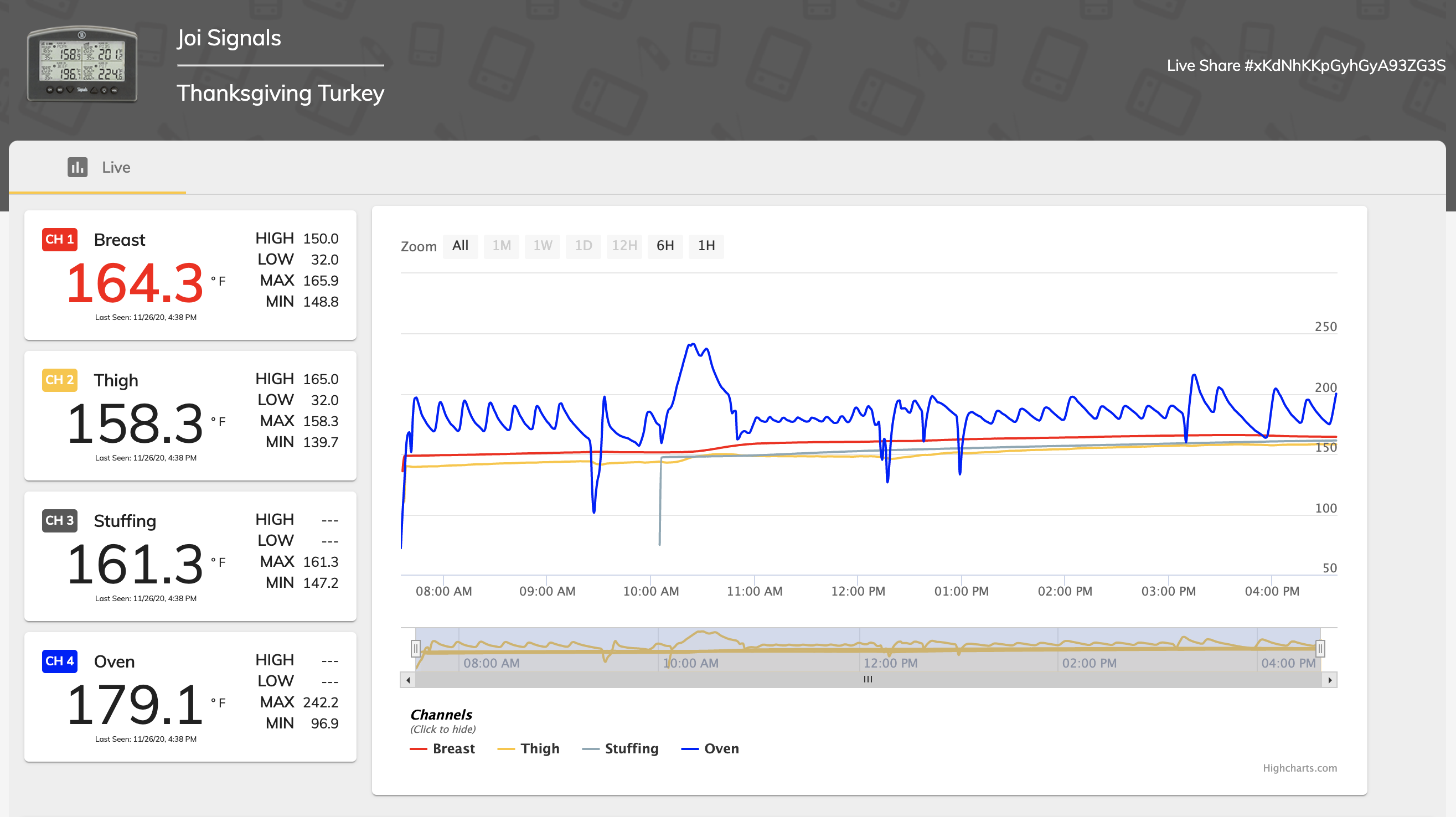 The turkey and oven temperature. I didn't set the thermometer up until the turkey had roasted overnight.

With plenty of time and my new cooking skills and tools, I hope this year's turkey will be good.

Kenji Lopez says to cook the turkey for 3-4 hours at 300ºF for a 10-12 lb turkey. I found another recipe that says 10 hours at 250ºF for a 12 - 16lb turkey. This recipe says, "It’s okay to cook the bird over temperature. The meat will seize and then yield and become even more tender as it cooks, so I typically cook my bird to 180 F." That goes against many people who argue that you shouldn't let the chicken get too hot and sounds like the idea for beef where it gets tender after it get's tough. I didn't realize that people did that with poultry, but it makes sense.

10 hours sounds "better" than 4 hours, but still a bit short for such a big piece of meat and 250ºF seems a bit "hot" for a super-slow roast. I finally found this recipe that says 10 hours at 180ºF for a 14-16 lb turkey. This recipe says, "as you slowly roast your turkey overnight at 200 degrees F for approximately 10 hours, the low temperature and moisture is basting your turkey while you sleep. No need to baste your turkey." Which helps since the previous recipe said 10 hours but basting regularly and I wasn't sure how you were supposed to do this overnight.

Most of these turkey recipes suggest you cover the bird with butter and herbs.

The Food Lab had a reasonable sounding gravy as well so I'll try that.

Interestingly, The Food Lab at one point says to dry brine whole poultry for 24-28 hours, but in another section of the book goes on to say to NOT dry birds for more than 24 hours or you get leathery skin. I read this after I had started dry brining the bird so we'll see.

I started the turkey at 10PM yesterday after stuffing the turkey with stuffing microwaved to 180ºF per The Food Lab recipe.

At 8AM I put the extra stuffing into the oven in a glass cooking pan.

I noticed that the oven shut down around 9AM so I turned it back on. For some reason the temperature seemed lower so I increased the oven setting to 190ºF.

At 10AM the thigh was about 143ºF and the breast about 151ºF. The breast was at Kenji Lopez's target but the thigh was 20 degrees short so I cranked up the oven to 250ºF to try to hit my noon finish target.

At 10:30AM, read another recipe that said to do it at 170ºF for 1 hr / lb and decided to take longer and lower so turned my temp back down to 190ºF. This recipe also calls for blasting the high heat at the beginning to kill the microbes on the surface of the turkey before going into the slow roast mode.

I ended the turkey at 4:30PM with the thigh at 158ºF. The turkey was juicy, but the skin was a bit tough. I think that next time I should try dry brining for only 24 hours.

Another thing I noticed was that the temperature differential between the left side and the right side of the turkey was quite large and the legs and thighs lagged behind the breast quite a bit. I think that having the legs pointed to the back of the oven, which is supposed to be hotter, even at an angle would have been better. That and turning the turkey from left to right half way through. 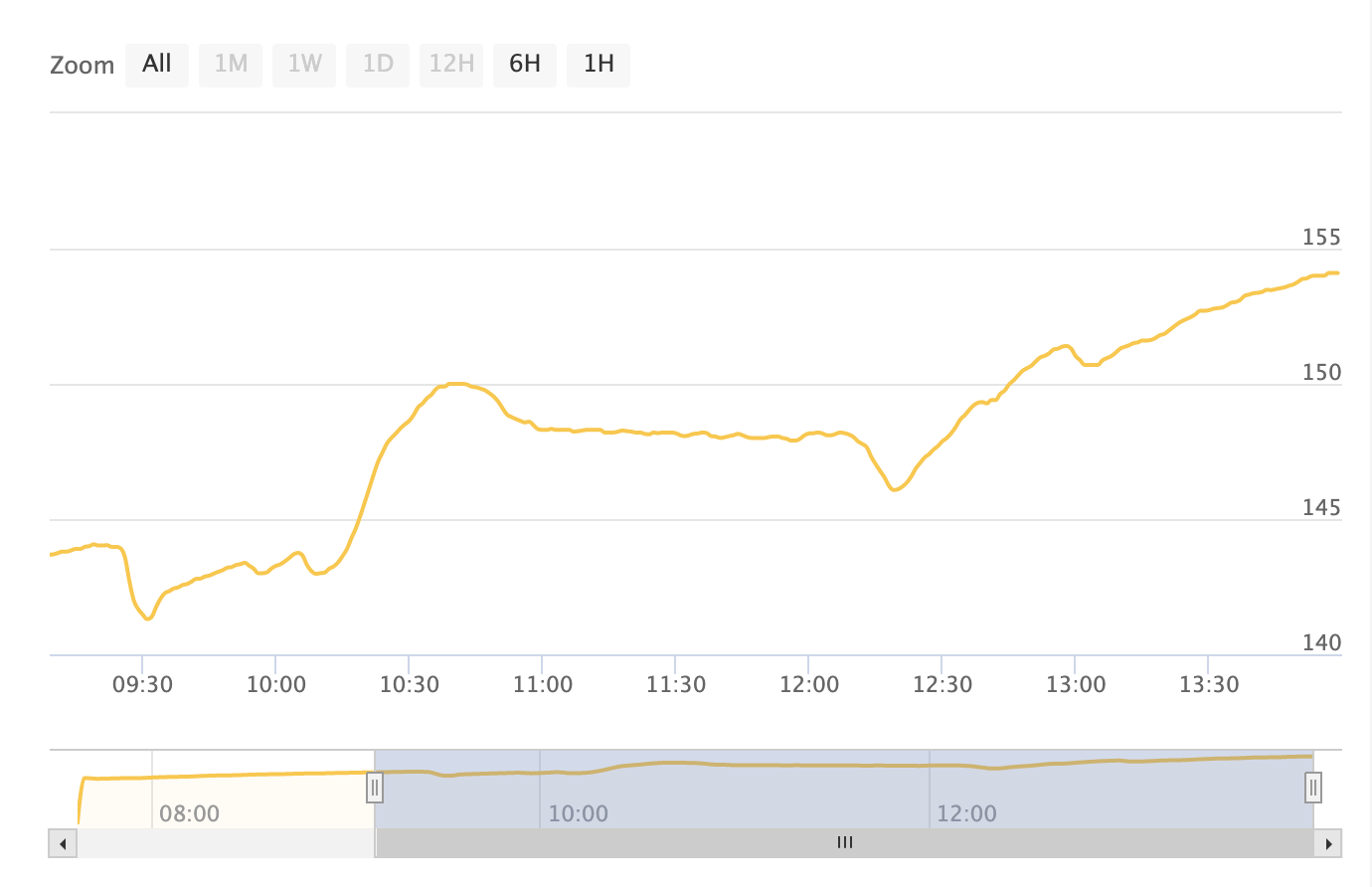 The other thing that I noticed was a "stall" at around 148ºF in the thighs and a significant slow down in temperature rise as the turkey got closer to the oven temperature. In fact, with this turkey and my standard slow roast chicken, it feels like the majority of the time of the cooking is spent on the last few degrees as the bird closes in on the target temperature. I should probably budget more time, maybe 24 hours as the last recipe says.

Lastly, I made the gravy, which turned out great, several hours before the turkey was served. As it reduced and then cooled, I noticed the emulsion starting to fail. Another note to self is to do the gravy during the window where you're resting the turkey.

My temperature data and chart are accessible via ThermoWorks Cloud.